I know I say this every month, but seriously where the heck did April go? I do not like the way time moves as an adult. I remember feeling like time moved so slow as a kid, now I’m desperate for it to slow the hell down.

There’s not much reason to separate this post with headers anymore since it’s withered down to just two topics now. Best of Music Friday can be found HERE and you can read about why Photography won’t be listed HERE.

I read a lot of really great books this month as pictured below. I had hoped to read more than this, but finding the balance between writing and reading in my free time is still a lopsided thing for me. All the titles below the picture are clickable and will take you to my GoodReads review if you’re interested. 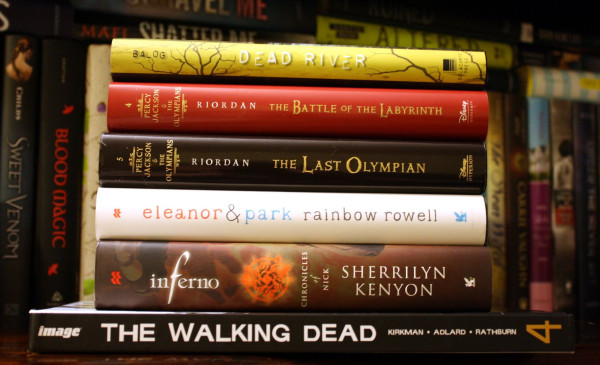 As for writing, I also hoped to write more than I did, but I’m not entirely disappointed with my word count this month either. Partly because it’s still over my minimum monthly goal of 5K and also because I closed up all the holes in the start of my MS. Dreamsters is now officially a little over 31K and this blows my mind in such a good way. Just a few months ago it was still a baby of a story. I’m really grateful for the cooler weather holding out for a change and blessing us with a chilly April. I have no doubt that it helped me stay focused on Dreamsters instead of letting Summer Novel butt its ugly head in before I was ready for it. I don’t know if I’ll be as lucky at the end of May, but I’ll certainly try really hard to keep Summer Novel at bay at least until June. Final April Word Count: 7,231 words

So that was my April, sort of mediocre, but not all that horrible really. How did you spend your April?