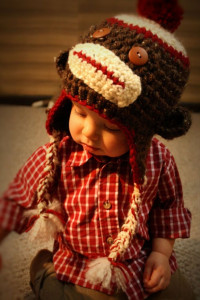 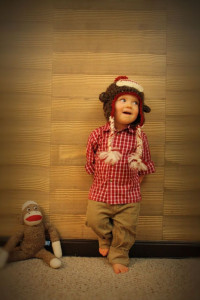 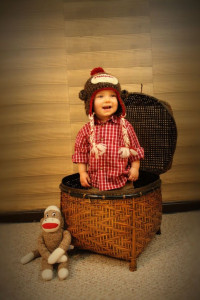 10 replies on “February: In Review”

Hi! Firstly, thanks for stopping by A Nudge and for the lovely comment. I’ve been meaning to check out Diana Peterfreud’s books. I’m also looking forward to reading Paper Valentine. I really love Brenna Yovanoff’s style, so I’d probably read anything she writes. 🙂

Your nephew is ADORABLE and I loooove that sock monkey hat. It is the CUTEST.

No problem! My friend Akoss tweeted about unicorns and I just couldn’t resist. 😉 Thank YOU for stopping by my blog. Very few people reciprocate these days so I really appreciate it.

I’m the same way with Brenna’s work, though admittedly this book felt different than her others (not in a bad way). I hope you like Diana’s work whenever you give it a shot!

Thank you for your compliments on my nephew and my sister’s crocheting. I always feel sort of biased so it’s nice when others agree. 🙂

Also, thanks for the congrats on the word count. I’m still riding an accomplishment high!

I didn’t read as much as I wanted to in February, either. Of what you did manage to read, though, I’m glad to see you enjoyed Paper Valentine! I can’t help but be reminded that I still need to read The Replacement sometime. (I am so behind on my TBR pile. SO BEHIND.)

Also, congrats on writing so much for Dreamsters during Grapemo! Yay! So exciting how you tripled your planned word count–what a fantastic accomplishment! 😀

Also, Gideon is so adorable, as always! That Sock Monkey hat of his is just too cute. I’m amazed that your sister made that. She has so much talent!

Akoss and I decided yesterday that TBR piles are just out of control by nature so it’s understandable to be SO BEHIND on it. I think of all of Brenna’s books you’ll like The Space Between the best, though. It’s my personal favorite.

Thanks for the congrats on my Grapemo success and for cheering me on during it! It really helps having a support system.

You didn’t mention it, but congrats yourself on reaching your Grapemo goal and having a successful launch of your webcomic in February. Pretty big month for you, if you ask me! 😀

And, my sister amazes me, too. I should do an updated post of all her latest creations – they’ll blow your mind. Also, Gideon… so cute. I hope if she has another kid, they’re equally as cute or I’ll feel terribly guilty. Ha!

Thanks again for joining me in GRAPEMO! And I love that monkey hat. I would totally wear it! 🙂

Thank YOU for hosting it! It was such a big help for me!

And you wouldn’t be the first adult to wear one of the funner hats. An adult recently ordered THIS from my sister for themselves. Terribly cute.

Congrats on the grapemo goal. *throws confetti*
I only achieved half of mine but I’m still glad I got something done.

Your sister is sooooooo talented. I can only dream of being able to do things like that.

Half is more than none! I’m really glad you participated, I hope you can continue finding time to work on your WIP! 🙂

And, yeah, she amazes me. It was her resolution to learn crocheting last year since it’s something my great grandmother did. Her goal was to make an afghan. After that was complete she just got creative and now her stuff is leaps and bounds more impressive. This year she’s giving quilting a shot, but it takes longer so I doubt she’ll stick to it.