Just before Christmas 2016, longtime porch queen QT Pie brought me her 2nd litter of kittens for the year (the previous bunch had shown up in late June). While I had let the 1st gang live the outdoor porch life and grow up together, when this 2nd group showed up, I started to panic. My little porch gang had grown from 6 cats to 11 overnight and 5 of those cats were teeny tiny fur babies, who definitely wouldn’t survive winter out in the cold with their little baby coats. So I reached out to a local TNR group, in hopes that they could find homes for the kittens and also help stop the growth of the existing porch gang. We started trapping over Christmas break and 3 weeks, a lot of tears, and close to $600 later, we’d trapped, neutered/spayed, and returned all the adult cats to my porch and found homes for 3 of 5 kittens, with the remaining 2 going into foster care. This is when Callie came into our world.

In a litter full of female orange tabbies (which is an oddity in itself as something like 90% of orange tabbies are boys), Callie was the only calico and her markings were so striking we just had to keep her. She was a sickly little baby, super underweight compared to her siblings, and took a lot more work than I anticipated to socialize and train into being a house cat. Tay, our then 12 year old cat, was virtually no help. In fact, she was so bothered by her new sister at first, she made it hard to even have Callie in the same room with her. They’re still not besties, because Callie has endless energy and always wants to play and Tay’s an old grumpy pants, but they’re growing on each other in our new house. And Callie is HUGE now, taller and longer than her big sister even.

Cats became a theme for 2017 after the first round of TNR and adoption, though. As spring neared, and the porch gang’s presence was more prominent, I’d notice my neighbor across the street filming us whenever we’d go out to feed. She’d complained once before to me that cats were pissing in her yard. I doubted it very much, but offered to buy deterrent and treat her yard for her. She never took me up on the offer. But she did proceed to agitate our other neighbors about the cats and file enough complaints to the apartment complex that they finally started threatening eviction to people who wouldn’t speak up about who’s cats they were. When they finally landed on us and I admitted I was the one feeding them, they told me I needed to stop immediately or face eviction myself. I explained how I’d just spent all this money having them fixed so that they were healthy. I tried to explain how much of a benefit a stable colony is to an apartment complex and that I’d already tried to find them homes, but there weren’t any. They didn’t want to hear any of it. So, after 9 years of apartment life, finding a house became more than just a desire, it became a necessity – so that we weren’t evicted and so that no one hurt the cats.

It was another couple months before we finally found the house that would become our home and the moving process was long and tiresome because we were relocating to another state. We got in the habit of packing the truck every time we went to the new house and even with that many single car trips it still took another 2 rounds with a moving truck to get all of our stuff to the new house. For the whole month we spent moving, I had to go to the apartment every night and starve the cats, in hopes that they’d fall for the traps so I could start the relocation process. When I tell you it’s an emotionally difficult thing for all parties involved, I’m not joking. There’s nothing worse than a cat who’s come to trust you as their food source, screaming at you, begging for food, but too afraid to walk into a cage they’ve been trapped in before. And then, once you’ve successfully trapped one, take it to a new location, completely foreign to them, and watch them hide in absolute fear.

Our new house has a 1 car garage and since we only have 1 car, we had no intention of using it for the car, so it seemed like a perfect place to house the strays for a few weeks while they got acclimated to the new environments smells before releasing them in the wild again. The garage is connected to the house via breezeway, so it makes for easy feeding without fear of them escaping. In those first couple of weeks as we’d catch a cat and bring it home, we almost never saw them. They were so scared, they lived in the garage’s rafters. And we knew that our only hopes of ever seeing the cats again was in catching their leader: Lion-O. Where I could successfully trap one of the others in a couple days, it took more than a week of starving Lion-O and some bigger, fancier trap to finally catch him. And it was down to the last few days of us even being allowed on the property anymore. The night before I actually caught him, I cried the entire ride home over the possibility of having to leave him behind and what that’d mean for both him and his siblings future. He was so mouthy in his protest of the cage and how unbelievably hungry he was. It was the absolute worst sort of torture for the both of us. There’s just no way to make a cat understand that if he just gets in the cage, he can be with his family again. Or is there? 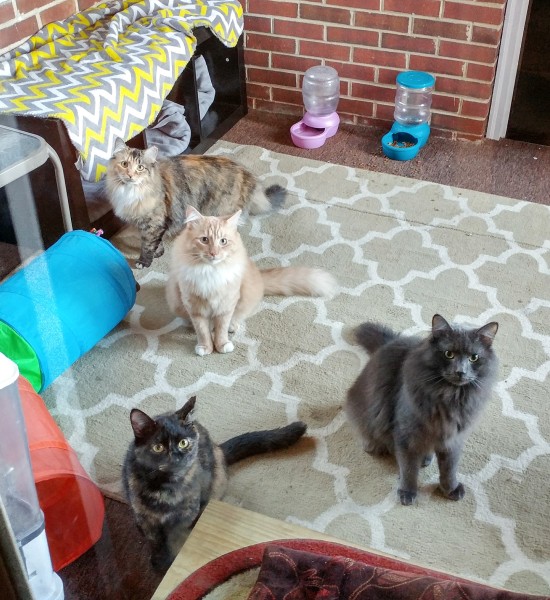 I sound like a genuine crazy cat lady here, but I cried again when I caught him. Out of sheer joy. Even my mom, who doesn’t even care about cats, but was there to keep me company, couldn’t contain her own relief after witnessing the intensity of trapping for just one day. Once he was caged, he wasn’t nearly as mouthy as he’d been. In fact, when you trap cats you have to immediately cover them with blankets to keep them settled down, but for the whole ride home, I lifted his cover so he could watch the open road ahead of us and I told him all about how much happier he was going to be at our new house, with his brothers and sisters and he was completely calm. And again, I know I’m reaching crazy cat lady town when I say this, but when we released him into the garage, he casually walked out, unlike the other cats who darted for hiding and let out this long meow, deeper and louder than I’d ever heard him make. It sounded like he was saying, “Guys?” as if to see if I was really telling the truth. And the chorus of replies that erupted in that garage was enough to have me crying again. They literally meowed at each other from the rafters for an hour, like they were filling each other in on all that they’d missed. After weeks of them not making a peep, it was the greatest sound. The TNR program I worked with says this was some of the greatest evidence they’ve seen on how essential it is to relocate a colony as a whole and not separate them. I have a tiny clip of their joyous meows HERE if you’d like to listen. That night when we went to check on them again, the cats were everywhere, walking above us without a care in the world – no longer afraid of us even seeing them, now that Lion-O was there. And the progress that followed that night convinced us that there was no way we could release them into the wild again.

You might be doing the math about why only 4 of the 6 remaining cats came with us, so I’ll clear that up before closing. There was a large orange cat, no relation to the rest of the cats, that went completely MIA after the TNR program. He was a spotty visitor to begin with and perhaps it’s because he was someone’s inside/outside cat and they never let him out again after they saw his clipped ear. The last cat was QT Pie herself and there is a large part of me that still regrets leaving her behind. But she was even harder to catch than Lion-O the first time and her visits became less frequent and not consistent times once she was fixed. I suspect she was being fed elsewhere because she always looked well fed, but she just didn’t hang with her kids once they were separated and trying to force them into a colony in the new location could have been bad for all cats involved. I still send wet and dry food to my friendly old neighbor, who sees QT Pie on occasion and makes sure to feed her. I worry about her, especially now that winter has set in, but my old neighbor keeps me updated. And if QT Pie’s safety ever seems at risk, I know the TNR program would help us find a solution for her too.

I can’t rave enough about TNR and how much more important it is that I could have even imagined until I got involved. The group I worked with TNR’d over 1000 cats in 2016, probably even more than that in 2017 – all within the same county and they’re not the only group providing this service. Cats reproduce at such a rapid rate, multiple times throughout the year, that you can quickly find yourself with a hoard of them if you’re not careful. The organization I worked with is called Best Friends of Harford County and they’re always in need of volunteers and/or donations, so if that sounds like something you’d be into check them out! 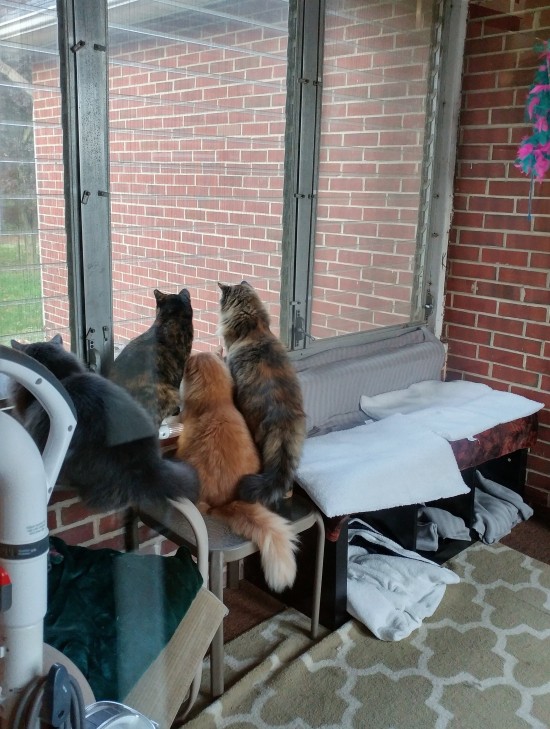 (From Left to Right: Gandalf, Torri, Lion-O, and 2Face)