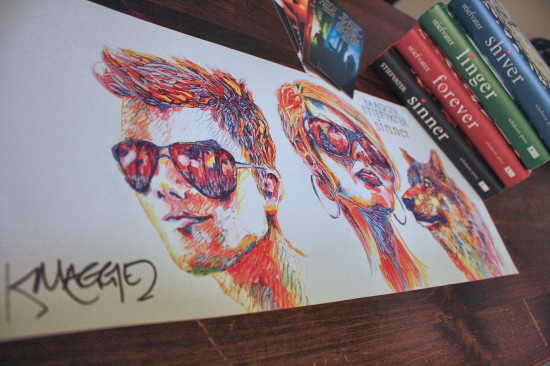 I don’t know when it happened, but somewhere between my teen years and adult years I lost the ability to be social. When it comes to interacting with anyone (but strangers are even worse), I am basically crippled. It’s an especially frustrating thing because it’s not like I want to be this way. In fact, it’s the opposite. I want to do all sorts of things I never end up doing out of fear and then I’m left with regret.

This year, you may remember, I made a resolution to have a little more moxie. Because my life is slipping away from me fast and I can’t accept being old with even more regret for all the things I’d wished I’d done. So I told myself that if events came up this year around me (concerts, book signings, etc…) I would make myself go, no matter how afraid I was. This promise I made to myself was finally put to the test today and I’m happy to report I passed. But it wasn’t easy.

The event I’m referring to is Maggie Stiefvater’s Sinner Tour. For those that don’t know, Maggie is like my writing hero. I’ve never really aspired to be like anyone, ever, but if I could be even a percentage of the writer Maggie is, I’d be happy with life. Her writing ability, dedication to her craft, and overall brave attitude about life is admirable and it encourages me. It seemed fitting that the first author I’d meet be one so important to me.

In the weeks leading up to this event, I asked as many people as I could to go with me, thinking it’d be less horrifying if I wasn’t alone. Because it wasn’t just being at this event that was scary, it was actually getting myself there since it was located in the city – the city in which I never wander and certainly not alone, but no one was up for the trip and I couldn’t be mad about that. For a minute there I almost talked myself out of going, but I held onto that promise I made myself. This morning, in preparation for this event, I mapped my drive there on Google Earth, put a bunch of music on a CD for Maggie, and got myself so worked up over going that I almost made myself sick, but I refused to back out. For one, I’d told her on FB that I’d be there and she even replied and two, I’d promised a friend something from the event. I’m not good at breaking promises, especially promises to other people.

The drive there was less terrifying than I pictured it. Either that, or I’d gotten myself so worked up before even leaving that I’d exhausted all my nervous resources before it was really time to be nervous. I got there a half hour early and was the 14th person in line inside a bookstore smaller than my entire apartment. It already felt packed with just the 14 of us and then about 100 more people showed up. At least. To make the closeness of so many strangers a more uncomfortable thing for a person like me, the A/C was ancient and nearly useless and it was 90 degrees outside. At one point I was so hot I started to feel faint, like I might pass out of throw up. Thankfully neither happened. I met two lovely ladies (Ashley and Shana, both book reviewers you should check out!)  in the line who nudged my social anxiety aside and helped the heat seem more tolerable. And after some parking space drama, Maggie finally arrived.

She parked her Camaro, Loki, right outside the bookstore and a couple of the younger girls squealed which was cheesy and adorable at the same time. Maggie strolled in wearing her signature outfit: a black tank top and boots, removing her sunglasses with one hand and carting a skateboard in the other. She had this air of coolness that made her seem even more famous than she actually is. I was shocked by how much it intimidated me for a minute. She talked for a while before signing, telling stories of her youth and why she wrote Sinner, and then took reader questions and immediately revealed just how regular she actually is. Awkward even, in that perfectly good way. She’s animated and excitable and I watched her in a bit of awe because I can’t even imagine ever having that much confidence speaking to a crowd if/when I ever do get published. I wonder if she was always that personable or if it’s something she’s developed throughout her career.

The wait in the heat once she started signing was rough, but thankfully I was number 14 in line. Actually meeting her went by too fast. I’d only taken my Shiver series, thinking it’d be selfish to take all my books and waste so much of her time, but I wish I’d just brought them all now. She was really friendly, the kind of person you instantly feel comfortable around like you’ve known them forever, and totally understanding of my awkward anti-social self. I told her I was the one that had predicted WhitePantsNovel was actually about Cole on Tumblr so many moons ago and she did that whole, “That was you!?” surprised reaction. Felt pretty cool to come out of my anonymous status finally.

I left in the middle of a thunderstorm, never happier to drive in the cool rain. I still feel a little high over the whole experience. Partly because I met someone so significant in my writing dreams and partly because I told myself I’d do something terrifying and I didn’t back down. As lame as it might seem to some, I’m proud of myself and meeting Maggie was the reward for overcoming my fear. All-in-all, an awesome day.

Note: You can click through the pictures below. Sorry for the poor photo quality. Unfortunately, my camera wasn’t performing at it’s best. :/