It’s been a long time since I really talked about writing. I mean, sure, I’ve moaned about my lack of time for it and how creatively dead my brain has been, but when is the last time I really talked about the books themselves? I think it’s been ages, to be honest. Like, possibly years even. Perhaps you don’t even really know anything at all about my completed novel Dreamsters, except that it’s in the horror/thriller category. And so, with the help of some awesome art I commissioned artist and friend, Heather R. Holden, to do, I’m going to talk about my writing – what it’s about, what I’ve got, what I need, and where I’m going with it – and maybe it will not only intrigue you, but help me get back into, you know, actually working on them again. 🙂

Dreamsters (not an actual title – that is still undecided)

About: This story is about a creepy old lady, a girl with a nightmare curse, and a foolishly kind boy who feels compelled to get involved with them both. I consider this story a nod to one of my favorite horror films A Nightmare on Elm Street, though more thriller than horror, maybe. 😉

What I’ve Got: A completed manuscript at around 70K words.

What it Needs: A completed 2nd draft. I’d started on this a couple months after I finished the 1st draft last year, but there are still major portions of the book, particularly at the end, that need heavy rewriting to finalize a 2nd draft.

Where it’s Going: Publication? I hope. It was my intention to have this 2nd draft sharp enough to start looking for an agent this year, but so far this unfortunately hasn’t been the case. 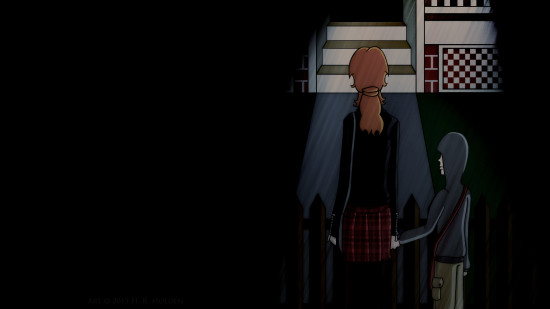 Picture background: This comes from the end of Chapter 2. Milo’s stayed up late to get ahead on some homework and just before going to bed, glances out his window at Mrs. Womack’s house across the street. This is the scene he sees and the lines from the book look like this:

Illuminated by the street lamp is a girl in a red plaid, pleated skirt, with black tights and clunky boots, and a black leather jacket being destroyed by the rain. And a boy significantly shorter than her, holding her hand, in a hoodie and cargo pants that look too big for his small frame. Each of them carry just one bag, hardly large enough to hold any decent amount of personal possessions, and they stare at Mrs. Womack’s front door from her gate.

I don’t need to see their faces to know who they are.

About: I’ll let the main character tell you what Crack the Sky is about. 😉

My name is Tilian King and I found a girl in the woods one night. I sound like a fool for saying it, but I swear the lightning led the way.  She was covered in blood; I’m *practically* a saint for saving her.

She claims she’s my guardian angel and that demons took her wings so she can’t protect me. From what, she won’t say.

She also claims my girlfriend and father are demons and that my dead mother is an angel like her. I asked her what that makes me, but again, she won’t say.

I think she’s f@$%ing insane. Escaped from the looney bin or some shit. It’s somehow both annoying and hilarious to me.

Still, and I’d never admit it out loud, it is sort of nice having someone to share the lonely mansion I call home with now, since my dad’s never around. Plus, who doesn’t love poking fun at naiveté? Leilani’s chock-full of it and I’m as rotten as they come.

If you’d like to see a few examples of scenes from Crack the Sky, I’d actually posted some when I started this book in 2011 for NanoWrimo. Click HERE! (Note: these scenes were roughly written and have since been polished so they aren’t the final product by any means.) 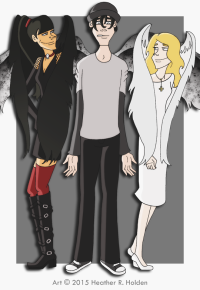 What it Needs: The rest? About 50K more words? No, in all seriousness, it needs the meat of the story. Crack the Sky is an intense sort of story, with a great deal of tough decisions and bloodshed. This first 18K has been the introductory phase, the buildup of backstory, and the planted seeds of character growth. Next, things get crazy. 😉

Where it’s Going: Oops, I think I sort of answered that above? I guess I could add that it’s not going to have a happy ending. Okay, so it won’t be super awful, but not the happily ever after type of ending that’s all too common these days because life doesn’t always work that way so why should make believe? 😉

Picture background: I’d told Heather that if this picture were titled I’d call it, “Torn,” because that’s the feeling I wanted to come across for Tilian. So that it’s not too spoilery, I won’t tell you much about what’s going on in it outside of TORN, but I will tell you who you’re looking at! (L) Mackenzie, Tilian’s Girlfriend (M) Tilian King, POV of the book (R) Leilani, Tilian’s Guardian Angel.

So, those are my current, big works-in-progress. I have another novel idea that springs up every summer, but never produces much words and another that I hope to eventually return to one day, as it was the first story I ever wanted to make into a novel, but both require a lot of world building and I’m just not sure I’m a good enough writer for that just yet.

If you’ve enjoyed the art accompanying these descriptions and think you’d like some of your own, head on over to Heather’s site for commission guidelines and prices! Or if you’re just a fan of the art and don’t need any for yourself, give her web comic Echo Effect a shot. She’s an excellent storyteller, too!