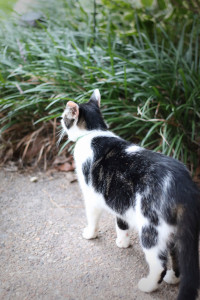 A couple months ago a white and black cat wandered onto our porch and bothered the crap out of our cat Tay, who watched from the window. No matter how much she hissed at him or how puffy the sight of him made her, he was just not afraid of her. Or us, for that matter. That first night he showed up, we went outside to see if the collar he wore had a tag on it and he came right up to us. Unfortunately, the collar was just a flee collar and this cat looked like it’d been a while since he’d eaten last so we fed him (further irritating our own cat all the while). We took his picture and spread it around on FB to all the local animal pages, but no one ever claimed him as theirs. He came back every night after that, seeking the safeness of our porch and the food he knew we offered.

After about a week of this, we put a water and food bowl out there permanently and just got in the habit of filling it in the afternoon so it’d be there whenever he showed up. In doing so though, we encouraged a whole gang of cats to seek food and shelter on our porch. And I’m not joking when I say, that black and white cat is the leader (we call him Boss now).

At first, they’d all come one after another, slowly creeping up our walkway, looking out for anything alarming, and then only eating what they needed before disappearing for the next cat to have a bite. But then Boss started coming to the porch with a kitten, with not much resemblance, but clearly Boss is looking out for him for some reason, as if it’s his kid. We call that kitten Boots, because he’s primarily black and gray, but has white feet. Once the pair of them started coming, the other cats started joining them, practically standing in a line together for their turn in the bowl. When they’re finished, they don’t even vanish right away, often times they get comfy in our porch chairs and hang out there all night. 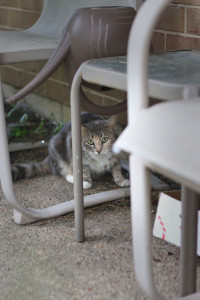 So now we’re officially feeding four more cats than the one we own. There’s Boss & Boots, like I mentioned above and Derpy, who’s a Himalayan with crossed eyes, and a little scrawny guy we call Lone Ranger, because he’s still a bit afraid of the rest of the gang and us for that matter. He seems reluctant to hang out around anyone for very long.

Getting their pictures has been difficult because unless Boss is around to be brave for them, they keep their distance from us while we’re outside filling the bowls. Boss on the other hand will eat right out of my hand. He even comes up onto the window sill to let us know they’re ready for dinner if we haven’t already filled the bowl for the day. It drives Tay insane.

I know I’ve started a dangerous habit with this. Right now it’s okay that they’re outdoor cats because at least they’re eating and have each other, but I know once winter arrives it will kill me knowing they’re out there without warmth. I would take every last one of them in if were even allowed to have the cat we currently have, but it’s not an option in this apartment. I’m afraid to call any of the local agencies to help find them real homes because most of them aren’t no-kill shelters and so I’d basically just be handing them over to death and I can’t bear that now. They have names, they matter to me now.

I really don’t know what I should do with them at this point. They trust that we’ll feed them everyday so I can’t stop. They feel safe enough on our porch to sleep there and I’m glad for that, but what do I do when winter gets here and they’re freezing? My porch and food aren’t enough to keep them safe and alive at that point, so how can I save these precious kitties come winter?