Well, June was mostly a waste. Okay, not entirely, I’m just in a negative state of mind these days. I blame the heat for it.

I read quite a lot in June. I had hoped to complete another book before the month’s end, but I’ve still got about 100 pages in that book so I guess it will count towards July. For some reason, I’ve been craving the feel of paperbacks lately, which is completely strange since I’m pretty much a strictly hardback kind of girl. Something about the books being paperback lately is tricking my brain into thinking they’re shorter (when in fact, they’re not at all – even longer in some cases) and since I’ve been trying to read as much as possible, I’m constantly reaching for the “shorter” reads first. Anyway, here’s what I read in June: 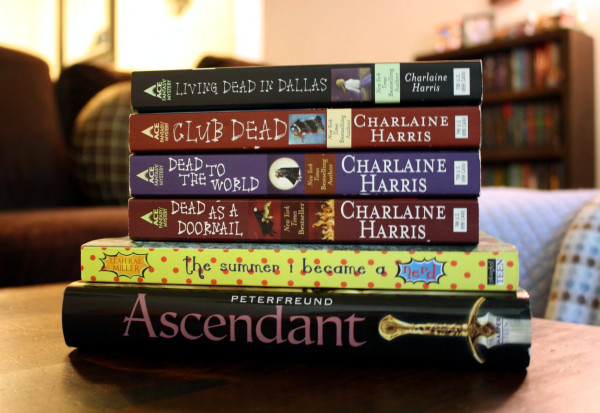 *Clicking the title will take you to my review on GoodReads*

I know I’ve stopped talking about photography in this monthly post, but I had a lot of good photo opportunities in June that I was actually pleased with like Huff Baby #2 Sex Reveal and Gideon’s 2nd Birthday Shoot. A friend of my sister’s has asked me to shoot her family this weekend and even though I said I was done with offering out my services, I said yes. I’m a bit nervous, but I’m hoping since they’re going to be outside, daylight shots, they’ll at least be better than the last family I shot in the dark. *fingers crossed*

And so now, I suppose I should mention writing. It’s obvious I was avoiding it, isn’t it? Well that’s because it’s the first month of the year that I have to report writing NOTHING. Not even a single word. If I thought I felt like a failure last month with my 3K report, imagine how worthless I’m feeling this month. Sigh.

I did print and redline the novel at its current 35K state, but I didn’t even make the revisions to the text document yet. I was busier than normal in June, but I’m really not sure why I couldn’t even write one word. I’m mostly blaming it on the heat because my mental state has been slowly crumbling as a result of the weather. I really need to move somewhere colder, bad.

Despite feeling pretty low about writing nothing in June, I’m trying to be hopeful for July. Jeannine Garsee () set up a private Grapemo session on FB and I’ve joined with the goal to write at least 5K. Back in February when she hosted the regular Grapemo here on LJ, I tripled that goal. I’m not confident I can do that again, but if I can pump out at least 5K in this hellish heat, then I’ll be pretty happy with myself. Plus, I need to get past this “middle of the book” phase. Apparently this happens with real authors, too (Victoria Schwab was just talking about this recently), and so hopefully once I get away from 35K and reach for 40, writing the second half of the book will come at a better pace like the first half did. It’s not like I don’t already know what happens; I just need to get it on paper.

So anyway, that was my June. It had its highs and lows. How was your June? Any hopes for July?

P.S. If you missed June's Music Review, click HERE. It's definitely worth it this month. 🙂