This month has managed to feel both long and short at the same time, which really shouldn't be possible. For the most part I've started off my 2013 resolutions pretty well, with the exception of weight loss – that's at a standstill at the moment, but I've tackled some other things worth being proud of like….

I had started a short story two years ago for Valentine's Day, but for one reason or another abandoned it a few hundred words into it (this happens a lot unfortunately). I suddenly got the urge to work on it again at the start of the month and finally finished it! I'm excited to share it once Valentine's Day is here. Keep an eye out for it! 😀

In addition to writing a short story, I've been plotting for Dreamsters. I'm not sure if it will be the book I aim to actually complete this year, but it's the one demanding the most attention at the moment (which I guess makes sense since I started it around this time last year). In February, I plan to participate in author Jeannine Garsee's GRAPEMO (which is like NanoWrimo, but cooler). My personal goal is to add 5K to Dreamsters. Even though I can change that goal as the month progresses, I really hope they remain chatty enough to actually complete or surpass 5K in February. I came somewhat close this month, so I really hope I've set a reasonable goal. Wish me luck!

Somehow I ended up reading a heck of a lot more this month than I set out to, but I'm not complaining. Getting a good jump start on my TBR pile for the year is A-OKAY with me. Most of the titles below the picture are links to the reviews I wrote for them on GoodReads. 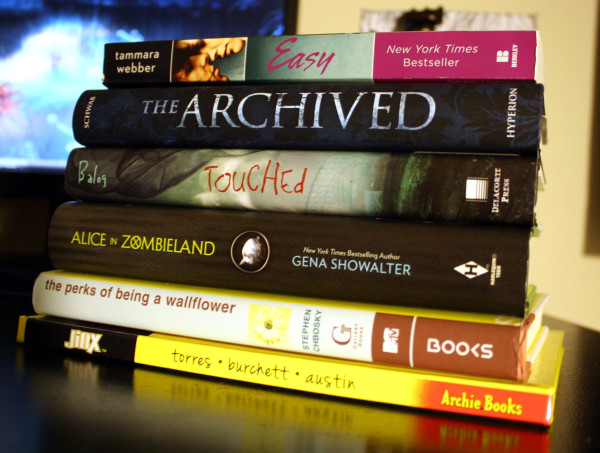 Touched by Cyn Balog
Red Run: A Short Story by Kami Garcia (not pictured, e-book)
Alice in Zombieland (White Rabbit Chronicles, Book 1) by Gena Showalter
The Perks of Being a Wallflower by Stephen Chbosky
Jinx by J. Torres
Easy by Tammara Webber
The Archived (The Archived, Book 1) by Victoria Schwab

I did my first little mini shoot with myself to test out my new lights finally. You can read about that HERE. Outside of that, I only photographed Gideon once this month, but boy did it yield some cute pictures. So cute that Sock Dreams posted this photo on their social networking sites because he's wearing their socks! 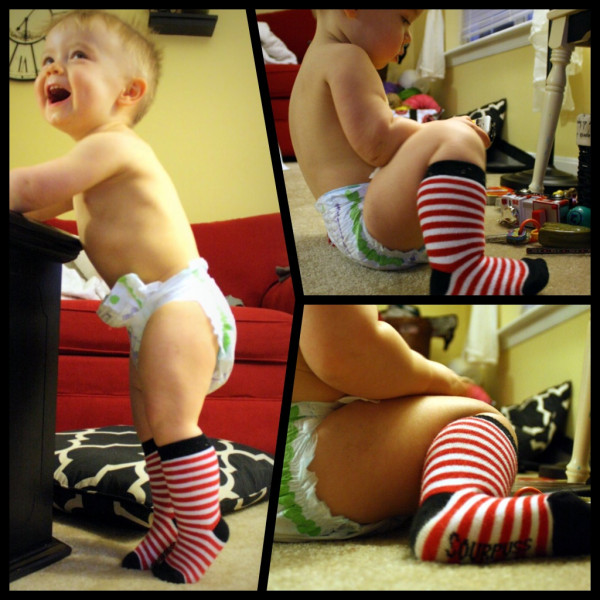 On this day, probably the biggest highlight of my month occurred. Gideon's been addicted to phones for as long as he could get his grubby hands on them. He has several of his own "play" phones, but still fights to play with real ones. While shooting him in the socks, he started playing with the house phone – making it ring, playing the saved messages, etc… when suddenly he said, "HELLO!" It sounded a little more like "herro" but it was obvious what he was trying to say. It's the first full word I've heard him say and it totally made my day. I'm not sure if this link will work, but we got him to say it a few more times and recorded him. Click HERE if you want to hear it.

Usually this would be the point where I'd review my favorite music of the month, but to not make this post as terribly long as it's been in the past, I've decided to make the music part of my monthly review it's own thing on the last Friday of the month called, "Music Friday" which is sort of a 'Best Of' of the weekly Music Friday posts I make on tumblr and FB all month. If you were reading this for the music and missed last Friday's post click HERE!

Overall, January was pretty decent for me. How about you?